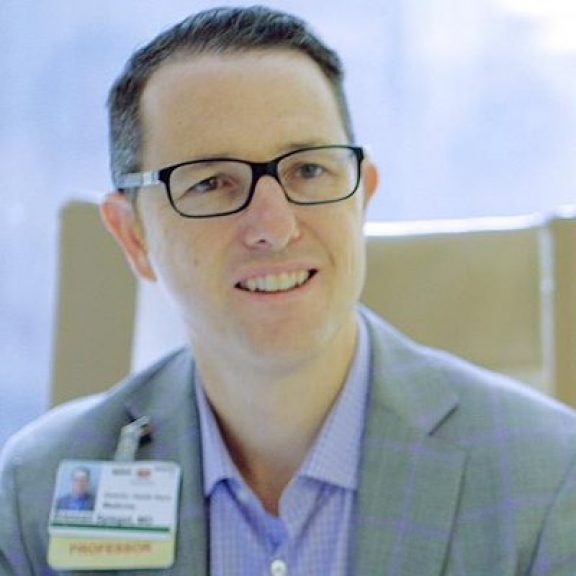 Professor of Medicine and Public Health

Brennan Spiegel, MD, MSHS, is the director of Health Services Research for Cedars-Sinai and Director of the Cedars-Sinai Master’s Degree Program in Health Delivery Science. He directs the Cedars-Sinai Center for Outcomes Research and Education (CS-CORE), a multidisciplinary team investigating digital health technologies, including wearable biosensors, smartphone applications, virtual reality (VR) and social media, which can strengthen the patient-doctor bond, improve outcomes and save money. CS-CORE unites clinicians, computer scientists, engineers, statisticians, and health services researchers to invent, test, and implement digital innovations, always focusing on the value of technology to patients and their providers. His team developed one of the largest and most widely-documented medical VR programs at Cedars-Sinai, and his work has helped to support a new field of medicine called Medical Extended Reality, or “MXR,” in which doctors use immersive technologies like VR to help treat conditions ranging from pain to anxiety and depression, to irritable bowel syndrome.

Spiegel has published numerous best-selling medical textbooks, editorials, and more than 250 articles in peer-reviewed journals. He is listed in the Onalytica “Top 100 Influencer” lists for digital health and virtual reality. His digital health research has been featured by major media outlets, including The New York Times, Bloomberg, CBS News, Forbes, Huffington Post, LA Times, NBC News, Reuters, The Washington Post, and the Wall Street Journal. Dr. Spiegel published the book “VRx: How Immersive Therapeutics Will Revolutionize Medicine” (Basic Books, NY, NY), which was named by Wired Magazine as one of its top 8 science books of 2020. Beyond his focus on digital health innovations, Spiegel conducts psychometric, health-economic, epidemiologic, and qualitative research across various healthcare topics. His research team has received funding from the National Institutes of Health, Robert Wood Johnson Foundation, Hearst Foundation, State of California Precision Medicine Program, PCORI, Veterans Administration, and industry sources. Spiegel is the immediate past editor-in-chief of the American Journal of Gastroenterology, the leading clinical gastroenterology journal in North America. He was among the first group of clinical researchers to examine the gastrointestinal manifestations of COVID-19. He continues to practice clinical medicine and maintains an academic teaching practice at Cedars-Sinai. A prolific speaker, Spiegel is frequently invited to present his areas of expertise at national and international events.

Dr. Spiegel earned his bachelor’s degree from Tufts University, his medical degree from New York Medical College, where he received Alpha Omega Alpha honors, and his master’s from the University of California, Los Angeles Fielding School of Public Health. He completed his residency in internal medicine at Cedars-Sinai and his fellowship at UCLA Medical Center. He is also the Founding Director of the Cedars-Sinai Master’s Degree Program in Health Delivery Science, where he teaches classes on digital health science, health analytics, and cost-effectiveness analysis.